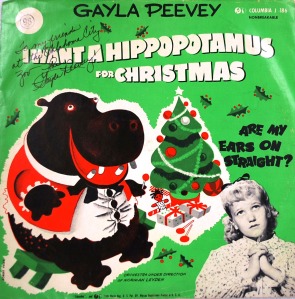 "I Want a Hippopotamus for Christmas" album cover. Image used with permission from Sony Entertainment, for the purposes of advertising this event.

What an honor to coordinate this historic event—the return of singer, Gayla Peevey, to the Oklahoma City Zoo!  Don’t recognize the name?  Maybe you’ll recognize her song “I Want a Hippopotamus for Christmas.”   ~Amy

I WANT A HIPPOPOTAMUS FOR CHRISTMAS

When Gayla Peevey, a 10-year-old Oklahoma City singer, recorded, “I Want a Hippopotamus for Christmas,” she made more than just music history. She soon found herself as spokesperson for a campaign that would eventually bring a real hippo to the zoo—just in time for Christmas!

In December 1953, with half a million copies sold, Gayla’s song became a best-selling Christmas hit.”  Zoo Director, Julian Frazier, decided to capitalize on the momentum of the popular song by granting Gayla’s request for a Christmas hippo; Gayla would then gift the hippo to the zoo so that all Oklahoma City children could enjoy it.

Thus began the Gayla Peevey Hippo Fund.  Children sent in their pennies, and a few days before Christmas, the final $3,000 was raised to purchase Mathilda, a 2-year-old hippo from Central Park Zoo.

Mathilda arrived by plane on Christmas Eve.  Gayla presented the hippo to the zoo before climbing to the top of the crate to see Mathilda released into her new home, where she would live for the next 45 years.  To this day, “I Want a Hippopotamus for Christmas” remains a favorite holiday song—especially to Oklahomans.

This holiday season, the Oklahoma City Zoo’s ZooZeum will feature a new museum exhibit “A Hippo for Christmas.”  It runs from Nov 20th to the end of January 2012.  See Gayla’s broadcast on the Ed Sullivan show, the original record album, and artwork by Gayla Peevey herself.  Mathilda the Hippo merchandise is available in the ZooZeum gift shop.

Date: Sunday, November 20, 2011 / 1:53 p.m.
Event: “I Want A Hippopotamus” Sing-Along and Meet N’ Greet with Gayla Peevey
Info: Join us for a festive time as we sing “I Want A Hippopotamus for Christmas” with Gayla Peevey, the song’s recording artist, in the Zoo’s Global Plaza at 1:53 p.m. on Sunday, November 20. Following the crooning celebration, guests can meet Gayla Peevey who will be at the ZooZeum from 2:30 to 4:00 p.m. The sing-along does not require admission.  A dance routine has also been choreographed for those interested.  The routine is available on the zoo’s Facebook page.  Regular admission required for the meet and greet at the ZooZeum. Come on, and sing-along!