The History Behind “I Want a Hippopotamus for Christmas”

Gayla Peevey was 10-years-old when she recorded the song “I Want a Hippopotamus for Christmas” in 1953.  The child star, often confused with Shirley Temple, acquired adoring fans quickly, especially in her hometown of Oklahoma City.  Gayla remembers the awkwardness when schoolmates stared at her during class or when children climbed into trees to stare at her through the bedroom window.

Gayla had a clear gift for singing, so her parents allowed her to perform on a local television variety program.  When Columbia Records noticed her strong voice and stage presence, they offered her a recording contract to sing children’s songs. 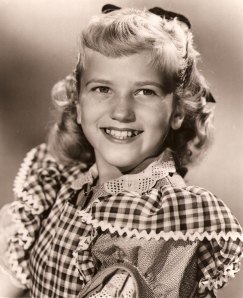 The first selection, a cutesy song about a hippo, delighted Gayla as much as it did audiences.  During rehearsal, Gayla made some improvements to the lyrics, which originally read “I want a hippopotamus for Christmas.  A hippopotamus is all I want.”  She also ad-libbed an extra “es” onto “hippopotamuses-es.”

That Christmas, the song sold a record half million copies;  Gayla even performed on the Ed Sullivan Show.  The Oklahoma City Zoo decided to capitalize upon the success of their local celebrity by starting a campaign to buy a hippo for Gayla for Christmas.  The catch?  She had to donate it to the zoo!

Mathilda, a two-year-old hippopotamus, arrived by airplane on Christmas Eve.  Gayla was at the airport to greet her and turn her gift over to the zoo.  On Christmas day, over 10,000 visitors came to see the zoo’s first hippo.

Almost fifty years later, the song remains a holiday favorite.  As Gayla says, “If you’re going to have a hit song, make it a Christmas song, because it comes back every year!”  It has especially experienced a resurgence in popularity among children, who are the grandchildren of the original audience.  Even Gayla’s grandchildren enjoy the song; although they find it hard to believe their grandmother recorded the song.

Gayla could be called a one-hit-wonder, because her musical career never reached such heights again.  She attributes this partly to the fact that the next few songs she recorded “weren’t very good songs.”  The lineup included one about a knock-kneed monkey and another with the silly theme, “I wish I were a whisker on the Easter Bunny’s chin.”

In addition, her parents didn’t have the promotional training needed to further the career of their youngest daughter.  Faced with the uncertainty of show business and the problem of an invasive fan base, escape seemed the best solution.  Gayla was uprooted from Oklahoma City and moved to California to live a “normal” life.

She did have a brief stint as a teenage recording artist, under the name Jamie Horton.  She netted a few successful songs; but the entrance of the new Beatles-style music caused Gayla to exit the singing industry for good.  However, she composed several published songs and eventually wrote commercial jingles for a living.

Gayla and her husband, Cliff Henderson, did have that “normal” life of working, going to church, and raising children.  These days, she says she is best known in California for her role of singing “Silent Night” from the tip-top of a human, singing Christmas tree.

In November 2011, the Oklahoma City Zoo welcomed Gayla as a guest celebrity to share her story and sign autographs.  During her visit, she participated in a Gayla Gala and various media events, celebrating her hippo song that is now part ofOklahoma’s history.

Thank you, Gayla, for bringing us such a delightful Christmas tale! 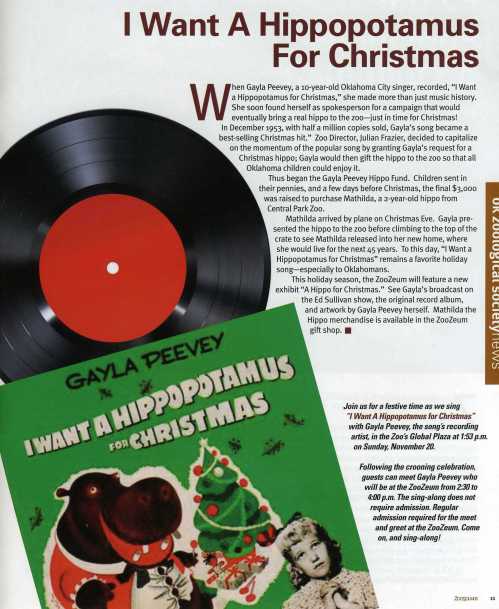