Here we are fishing on the Amazon! Photo by Val.

Too close to caiman!Photo by Amy Stephens.

I was fortunate to join my husband, Mike on his 10-day peacock bass fishing trip in Brazil—and it was a wild adventure! Mike hosted a group of 15 friends and clients, and I tacked on at the last minute as photographer/historian for the trip.

Going to the Amazonian rainforest is not for the faint of heart. You will see from the pictures that we had to wear very fashionable, full-cover gear to protect us from the bugs, hot UV rays, and occasional deluges of rain. We rose at 5:00am and fished until 5:00pm. We headquartered out of a main boat, but spent daylight in smaller 2-person fishing boats. Our Portuguese guides sat in the back to drive the boat and offer fishing advice (mostly in sign-language or broken English).

Mike caught many fish, including a 16-pound paca bass, and some of the people on the trip caught up to 23-pound fish! We saw caiman (alligators) swim past us and pink dolphins occasionally rose to the surface to try and snatch our fish from the line.

We were surrounded by jungle wildlife and I saw many birds fly by, including parrots and macaws, as well as the large blue morpho butterfly. Oddly, all sounds ceased during the day. From 9:30am to 3:30pm, we saw little wildlife and heard none. Then, as if an alarm clock went off, the birds would start squawking at 3:30. We even heard howler monkeys in the distance, although I never saw one.

Along the Rio Negro are unexpected islands of solid white sand. One night, our boat moored up to one of these large sand banks and the staff set up tables and chairs so that we could enjoy a dinner party. It was the only time during the week we were on land. The staff dug a deep pit in the sand and smoked all kinds of meats. They chopped down four palm trees from the jungle and dug deep holes in the sand to drop them into so that party lights could be strung around the area. As the evening ended, Mike walked down to the water and made a cast. A staff person started yelling, “No, no!” He shone his flashlight down the bank where Mike stood to reveal huge glowing eyes, a 10-foot caiman alligator lay less than 10 feet away. We suspect the staff knew he was there all along—and that’s the reason for the boundary of lit palm trees.

My favorite part of the trip was when our boats left the main lake and struck off down a narrow trail hidden in the trees. We had to move vines out of the way and duck branches—but once the boat made it down these “secret” trails, the trees would open back up again to reveal another lagoon full of fish. As we disturbed birds and bats along the way, they would swoop across our path.

Our boat, docked at the white sand bank. Photo by Mike Stephens.

My least favorite part of the trip was the rain. Yes, it is the rainforest, so water was expected—but we experienced more rain than typical for the November “dry season.” My rain gear was quickly saturated, making for a long, cold trip back to the main boat. We didn’t have hot showers or clothes dryers, either.

Every time I’ve traveled outside the United States, I’m reminded that I’m both blessed and spoiled. Although this was a luxury trip, we lived in a room/bathroom that was 5x10ft, with river water for the toilet, sink and bath (we used bottled water to brush our teeth!). We carried more in our suitcases than most of the boat staff owned. But the hospitality was wonderful and I loved our daily fish entrées, from fresh piranha soup to smoked bass–and I don’t usually like fish.

One amazing event occurred that still seems impossible. I was fishing with a gentleman in our group named Chip one day. About 3:30pm, a large fish broke off his line, taking the lure with him. Being such an expensive lure, we waited awhile to see if the fish would spit it up. He didn’t. We motored a half-mile up the river to a new location. A rainstorm struck and Chip was catching fish left and right for almost an hour. As we packed up to leave, that same fish exploded out of the water and spit Chip’s lure out right in front of us! 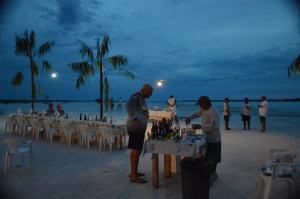 I’m thankful to have experienced the Amazon. As Theodore Roosevelt described when he traveled the Amazon—an invisible world surrounds you in the jungle. Invisibility renders the animals more able to survive its harsh conditions–which explains why hours sometimes went by without an animal sighting or sound. It also gives me greater respect for the people survive life on the Amazon.

After one large rainstorm, an amazing rainbow appeared above the river. Unlike those we see in the city, it was extremely bright, we could see the entire rainbow, and it lasted for a half hour. Sitting on the 2nd largest river in the world, surrounded by water that will raise 12 feet higher in the rainy season, I was reminded of God’s promise to never flood the earth with rain again. I was also reminded that God governs the whole earth and its many intricacies, habitats, and people. It’s an amazing world, and I’m glad to have seen a different part of it!

The Amazon Rainbow. The Promise. Photo by Amy Stephens.